skip to main | skip to sidebar

Report of the Buhay Foundation for Women and the Girl Child 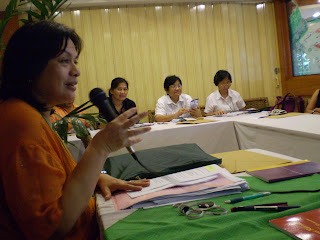 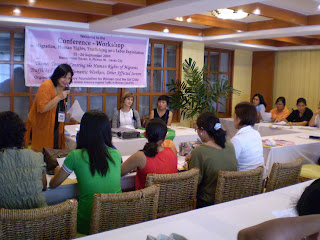 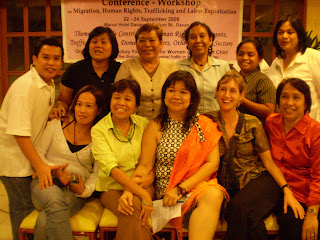 The project “National Workshop on Trafficking in Persons, Gender, Migration and Labour” was fully realized by the Buhay Foundation for Women and the Girl Child in partnership with the Global Alliance Against Traffic in Women (GAATW).
The two-day conference workshop was finally held from Sept. 22-23, 2008 though it scaled down participants from other cities in the Philippines due to a limited budget.

A total of 30 participants came for the conference workshop with Davao City as the venue . Four participants from Metro Manila (2 persons) and Baguio City (2 persons) as well as two other participants from Cebu City arrived in Davao City on Sept. 20 and 21 and attended the facilitators meeting that preceded the 2-day conference. Some 22 persons from Davao City (mostly women) and nearby municipalities of Davao province form the bulk of the local participants that attended the two-day workshop. They represent NGOs working on anti-trafficking , domestic workers and migrant workers issues, as well as women’s rights, academia and Davao City government social welfare officers doing anti-tafficking work. Two persons from the GAATW-IS based in Bangkok came as resource persons on the main topic of sharing the findings and recommendations from“Collateral Damage” research report as well as on the vision, mission, activities and programs of GAATW. It is noteworthy to state that there are at least four participants from the local self-organized groups including a Filipina migrant woman worker returnee based in Davao City who was trafficked to Malaysia and Filipina migrant worker entertainers who returned from Japan.

A full program and agenda was elaborated with various topics and resource persons The discussions were dynamic and enriching. According to the evaluation of the local participants, the workshop content and process gave them so much information and knowledge; provided lots of new insights and food for thought on trafficking, migration, labour and a rights-based approach; provoking new thinking on the esisting anti-trafficking work and approaches. Conference recommendations and a plan of action were drafted and sent out to the participants a month after the workshop (October 2008). The participants noted the positive contributions of the self-organized groups representatives (mostly migrant worker returnees from Malaysia and Japan) who selflessly shared their stories of labour exploitation, discrimination, trafficking into sex work and domestic work, abandonment of the entertainers children by Japanese men, etc.

Follow-up workshop meetings are now being prepared by the Buhay Foundation for Women planned to be held in Cebu City, Baguio City and Metro Manila between the months of May-October 2009 to deepen the discussion of issues and recommendations arising from the Davao workshop such as the impact of anti-trafficking initiatives to the human rights of migrants including domestic and sex workers and the rationale to form a support network and alliance that will serve as a platform to promote a human rights approach to anti-trafficking work and to recognize and promote the rights of various affected sectors of the domestic workers, women in prostitution, transgendered persons and trafficked persons themselves. A national preparatory meeting for the Southeast Asia Court of Women on Trafficking and HIV sponsored by the AWHRC (Asian Women Human Rights Council) planned in the month of June 2009 will also be merged by the Buhay Foundation for Women with the forthcoming workshops to add the dimension of public health impact and health rights of migrants, women in prostitution and transgendered sex workers and trafficked persons thru the HIV prevention component.

Thanks to GAATW for the support and partnership which is critical to an intervention for a rights based approach to anti-trafficking work in the Philippines and to promoting and centering the human rights of the affected sectors.
Posted by Buhay Foundation at 8:06 AM